Built On A Foundation Of Lies

Last night at our prayer meeting, we were invited to ask the Lord about any lies that he is working to tear down in our lives. We all have them. Maybe we know the truth, but there is still doubt inside; a part of us continues to rehearse the lies we’ve been told and still believe in the deep places of our soul. For example, I know that God is faithful and yet I still worry when I’m in a difficult situation. I’m afraid he won’t be faithful this time. I know the truth, but part of me doesn’t yet believe it.

It’s like that story of the demonized boy in Mark 9, whose father brings him to Jesus. The father says to Jesus, “If you can do anything, take pity on us and help us.” Jesus responds, “If you can? Everything is possible for one who believes.” The father quickly responds, “I do believe; help me overcome my unbelief!”

We’re a mixture of trust and doubt, of truth and lie, of surrender and resistance. But God is working to uproot the lies. That brings us back to last night.

As I was praying to God, asking him to reveal any lies he is working on in my life, an image began to take shape in my mind. It was of an old Roman style building with columns of stone. Just like an old Roman building, it was chipped and weathered. But it was mine! I could sense that this building was my life. 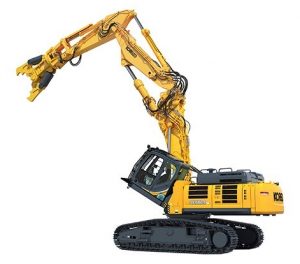 Next to the building a large and powerful construction vehicle came into view, the kind with the hydraulic claw that can rip through almost anything. I could sense that the claw intended to pull out one or more of the columns. I reacted in terror and protested immediately. I knew that the column was a load-bearing support, and if the column came down, the whole building might collapse. That construction vehicle now looked much more like a deconstruction* vehicle.

Again, this building was my life, and I was afraid of what might happen.

Though the vehicle was large and powerful (guess who the vehicle is!), it gently moved me aside. I felt a consoling presence. I knew I was being invited to trust this deconstruction vehicle. So, I stood by and watched.

Sure enough, that claw went to work on one of the middle columns of the building. In moments, the column was falling, and many sections of the roof with it. Clouds of dust filled the air, as rock and stone hit the ground. When the dust settled, I could see that now the building looked newer, stronger, and more beautiful. There was a great courtyard in the middle where the column had once stood, and I found that building much more inviting and attractive than it had been.

Still in prayer, I asked God what the lie was that he was working to remove from my life. What was this element that I had labored for so many years to build parts of my life on? He showed me that I had long believed that the old lie, “if you want something done right, you have to do it yourself.” In other words, I have believed for far too long that I can only rely on myself. Others are not trustworthy. They’ll either let you down by forgetting or backing out on the one hand or doing the work poorly on the other. Of course, if this is what you believe, then you can’t trust God either. You can pray, but don’t expect too much. God is doing great things for other people, but probably not for you. Besides, hoping for other people, or even God, to take care of you only leads to disappointment. It only leads to hurt. And maybe – you tell yourself – it’s kind of selfish, too.

I’ve been gaining awareness of this lie for some time, now. I have seen hints of it when I find myself micromanaging or overcontrolling situations and people. I see it when I take on too much work and find myself on the helping side of caregiving much more than the receiving side of it. I see it when I don’t even consider asking for what I need from others. And last night it hit me squarely in the face: I don’t trust people or God to take care of me, and that’s an exhausting place to be.

We were never meant to do this life alone. But early on, whether from external or internal reasons, I “learned” that I was on my own. I’ve been hyper-independent for as long as I can remember. I like to learn things on my own. I like to figure things out myself. I think I can do it all without help.

Naturally, since I “know” all these things to be untrue, I have many times in life asked for help and worked on projects quite successfully with other people. These things operate on a spectrum. But for me, it’s not a natural thing to ask for or expect help.

So last night, I confessed my distrust in God and others. I acknowledged in our prayer meeting what God was speaking to me. And then I prayed for freedom from this lie and a deepening reception of the truth in my heart and mind. Simply by sharing, I was trusting others with my process, which isn’t always easy to do. And by sharing now, I hope not only to help someone else, but also to further expose the lie in myself and invite others to be present with me in this deconstructive process.

The beautiful irony of God’s work in us is that he is often a deconstruction worker first. It is then that the real construction can begin. 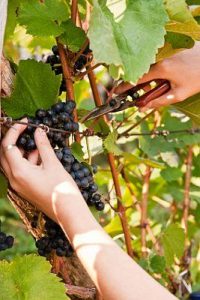 To use another metaphor, Jesus is the true vine, and his Father is the gardener. He cuts off every branch in Jesus that bears no fruit, while every branch that does bear fruit he prunes so that it will be more fruitful.

We pray that we will be fruitful. So, we must pray for the pruning, the tearing down of that which hinders our maturity in Christ. The parts of us that are built on a foundation of lies must be demolished so that the rest of us can be renewed, strengthened, and made more beautiful.

May it be true of us, Lord!

*In no way am I intending to evoke thoughts of the deconstruction trend going on right now in many Christian circles. I mean that I was afraid that this truck was literally going to destroy me.